Rebecca: The Emotion Thesaurus has had its own special place on my writing desk forso long, I had to look on Goodreads to see when I’d first read it. January 1, 2014. I’ve been using it for a while. 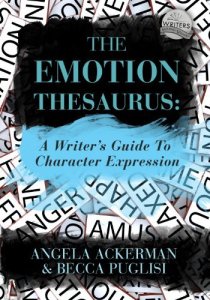 When I first started using the book, it opened my eyes to conveying emotions through actions. Well, okay, I used the easy ones all the time. The shrugs, nods and raised eyebrows. But the thesaurus helped me think about a more diverse range of actions humans use to convey emotion, and more subtle ones. I mean, you can only have characters’ brows furrow so many times in one story, right?

As I continued my writing journey, I started making notes on the pages. The thesaurus isn’t exhaustive; it only lists as many expressions as can fit on one page for each emotion. It also focuses on adult, mainstream characters. Where are the fist bumps for my middle graders? The face palms? I created my own mini-Emotion Thesaurus with the frequently used quirks of for my characters. I did this partly for character consistency throughout a story, but also to make sure that different characters’ expressions are distinct enough. I don’t want all my tweens biting their lip every time they get nervous.

Even with my personal Emotion Thesaurus, I still turn back to the original. When I’m stuck on how a character might convey their emotions in a scene, I like to push back from the keyboard for a second and visualize the action like a movie. What feels like the natural expression? When doing this, a scan through the appropriate page in The Emotion Thesaurus starts the ideas flowing.

Laurel and I want to send high-fives and a big “Thanks!” to Angela and Becca for these great resources. I’m sure you can imagine why we’re excited about the new tools coming out this week, The Urban Setting Thesaurus and The Rural Setting Thesaurus. Find out more about them here.

REBECCA J. ALLEN writes middle grade and young adult stories that blend mystery and adventure. Her best story ideas come from her two crazy kids. Unlike many writers, Rebecca did not write her first story at age eight…at least not fiction. She was the editor of her high school yearbook and wrote for her college newspaper. But her first fiction course scared the bejeezus out of her! Having overcome her fear of fiction, Rebecca loves see how much trouble she can get her characters into, and sometimes back out of. She’s on Twitter and is also a contributor at The Winged Pen.

LAUREL DECHER writes stories about all things Italian, vegetable, or musical. Beloved pets of the past include “Stretchy the Leech” and a guinea pig that unexpectedly produced twins. She’s famous for a nonexistent sense of direction, but carries maps because people always ask her for directions. When she’s not lost, she can be found on Twitterand on her blog, This Is An Overseas Post, where she writes about life with her family in Germany. She’s still a Vermonter and an epidemiologist at heart. PSA: Eat more kale!

Her short fiction for adults, UNFORESEEN TIMES,originally appeared in Windhover.

This site uses Akismet to reduce spam. Learn how your comment data is processed.